A dramatic last-minute goal by Emmett Loughran was enough for Rangers to snatch the New York U20 football championship title last Sunday and complete a remarkable comeback over Barnabas/Celtics.

Rangers trailed for virtually the entire game and at one stage faced an 11 point deficit to their Bronx rivals. They were a single point behind before Loughran stole possession on the edge of the small square and then poked the ball home with a sliding right foot.

The victory sees Rangers crowned New York’s first ever U20 championship winners. The competition was previously held at U21 level but the grade was changed and rebranded due to guidelines from Croke Park.

The wet and slippery conditions at Gaelic Park didn’t affect the high standard of football or the variation of scorers on show with an incredible 15 different scorers across both sides.

Barnabas/Celtics started off on the front foot and were finding plenty of space inside the Rangers’ backline. Patrick McGrinder got the first score of the day, followed by a smartly fisted point by Aaron Traynor. Gearoid Kennedy and Shane Brosnan then joined in with a point each.

The sharp-shooting duo of Shay McElligott and Chris Mulvihill replied with points to help Rangers get a foothold on the game but Aidan McDermott and Shane Brosnan registered points to re-establish Barnabas/Celtics four-point lead at the water break.

The only goal-scoring threat of the first quarter was with Rangers player Chris Muvihill who was denied by the quick actions of Michael Croke.

The game resumed with a bang after rehydration. Rangers player Lorcan Kennedy, who was roaming all over the pitch, got a point from his accurate right foot before Barnabas/Celtics’ Tiarnan McLaughlin slotted home the first goal of the game after two goal bound shots from Patrick McGrinder were blocked by the well-built corner back Cian O’Connor.

A strong 30 yard run by Joey Grace gave Rangers the chance to get a goal of their own, but keeper Brian Coen had different ideas – the Barnabas/Celtics keeper pulled off a solid save under pressure.

Minutes later a possession lost in the middle of the field turned out to be costly for Rangers as Brosnan and Cole tag teamed together to slot home another goal despite the best efforts of Cathal Egan.

Barnabas/ Celtics were now relentless – pressurizing the Rangers kick out and producing a strong running and support play game. Brosnan, Kennedy and McDermott added more points to the scoreboard and as halftime approached Rangers were 11 points down on a scoreline of 2-10 to 5 points.

However with seconds remaining Ashton Walsh kicked a pinpoint ball into McElligott, who found Emmett Loughran to deliver a powerful shot past Coen right on the buzzer-beater. Half time 2-10 to 1-5 but all to play for. 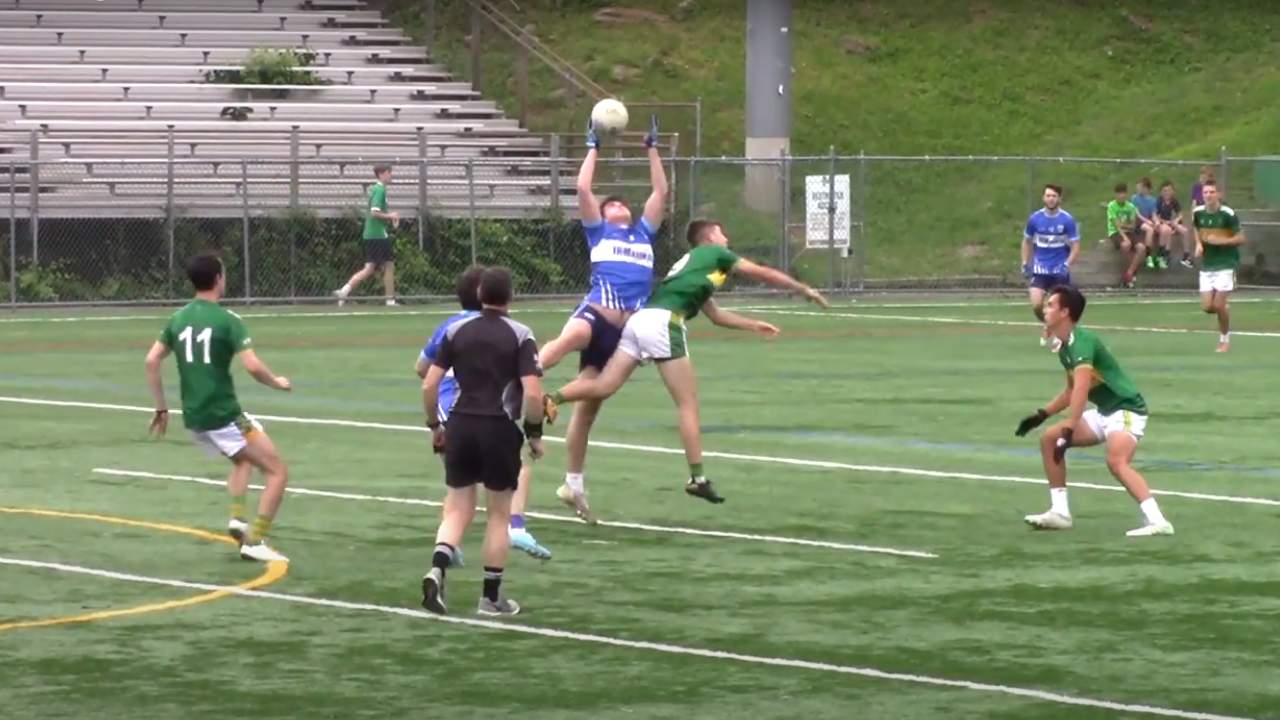 As the second half commenced Darren Gallagher and Jack Donohoe would have been looking to continue their strong performance in the backs for Barnabas Celtics, with Evan Mulgrew, Ciaran O’Connor and Shane Doheny doing likewise for Rangers.

McLaughlin scored the first point of the second half for Barnabas/Celtics, while Ranger’s Joey Grace converted a 45’.

Brothers Shay and Brian McElligott in at corner forward got a score each after some lovely passages of play for Rangers. Niall McKenna was coming well into the game but Rangers struggled to score from the attacks – some going wide and others dropping into the hands of Coen.

Momentum seemed to shifting towards Rangers and – while Mike Ryan was making a couple of bursting runs from the middle – it was Brosnan who grabbed the game by the scruff of the neck getting a few vital points for Barnabas/Celtics.

Going into the final water break Barnabas/Celtics still had the lead, 2-13 to 1-11.

Drama quickly unfolded after rehydration as McGrinder found Paidi Mathers who made a great run down the far right wing before putting Brosnan in on goal but his shot was denied by Egan.

Calvin Quinn – much like Barnabas’ Liam Rafferty had been putting in trojan work up and down the pitch – laid a nice pass to Grace who was then fouled on the 45 and opted for the high ball into the square – a tactic that was always going to favor basketball/ footballer Mike Ryan.

Ryan leaped up highest and blasted the ball into the Barnabas/Celtics net. 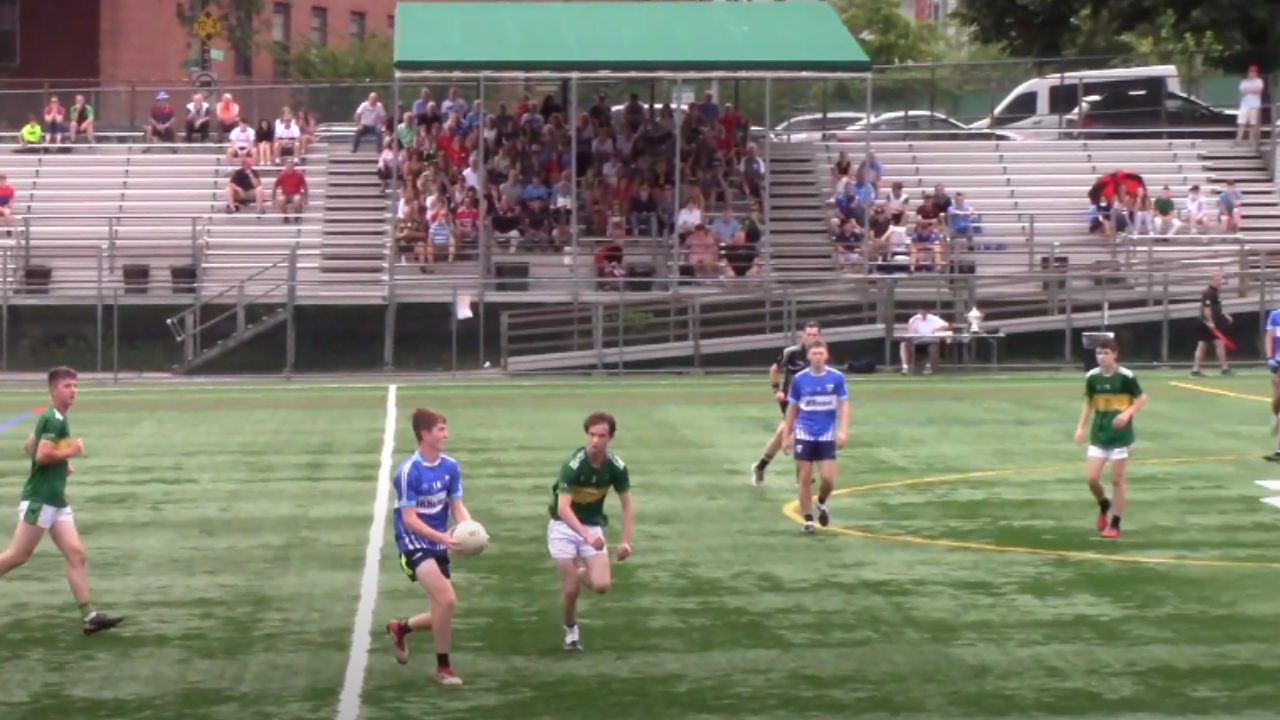 Jack Dennis was then to be the eighth different scorer for Barnabas/Celtics after Traynor had broken through the sea of blue and white.

The ball stayed with Barnabas/Celtics as Paidi Mather’s wearing number 4 ran 15 yards – broke through the Rangers defense and finished with a perfect pass to McLaughlin, who netted into the Rangers’ goal.

The Rangers comeback appeared over as the clocked ticked down. However, when leadership was needed it was Emmett Loughran, Shay McElligot and Lorcan Kennedy that stepped up adding a few more points and then a goal from Mike Ryan.

Gearoid Kennedy steadied the ship with a difficult free, bringing his tally to three points for the afternoon.

The scores came thick and fast in the closing minutes with Loughran getting his second goal of the day, after the work horse Calvin Quinn came tearing down the pitch to bring the sides level with 7 minutes to go – Barnabas/Celtics 3-15 Rangers 4-12.

Brosnan put Barnabas ahead with a point after some patient build up play – bringing his total to 0-7 from midfield.

With 4 minutes remaining Brosnan, who had been exceptional all afternoon, was given a black card by highly regarded referee Ciaran Lee for a late challenge on Ashton Walsh.

McLaughlin then found himself in on goal to seal the deal for Barnabas/Celtics but out of nowhere wing half back Eoin McCaffrey produced what can only be described as a superman block at full stretch to deny their Bronx rivals.

Rangers then went on the counter before Joey Grace hit a low effort into the goalmouth to try to salvage something. The ball was palmed down before Loughran won possession and fired the ball into the net for his hat-trick and the title.

As Ciaran Lee blew the full-time whistle both teams will know they left everything out on the pitch – gave a fantastic spectacle of free-flowing, attacking Gaelic Football. Print off or hold onto this match report – because in a few years’ time you will definitely see many of names mentioned again – this time for the New York Senior team competing in the All Ireland Championship 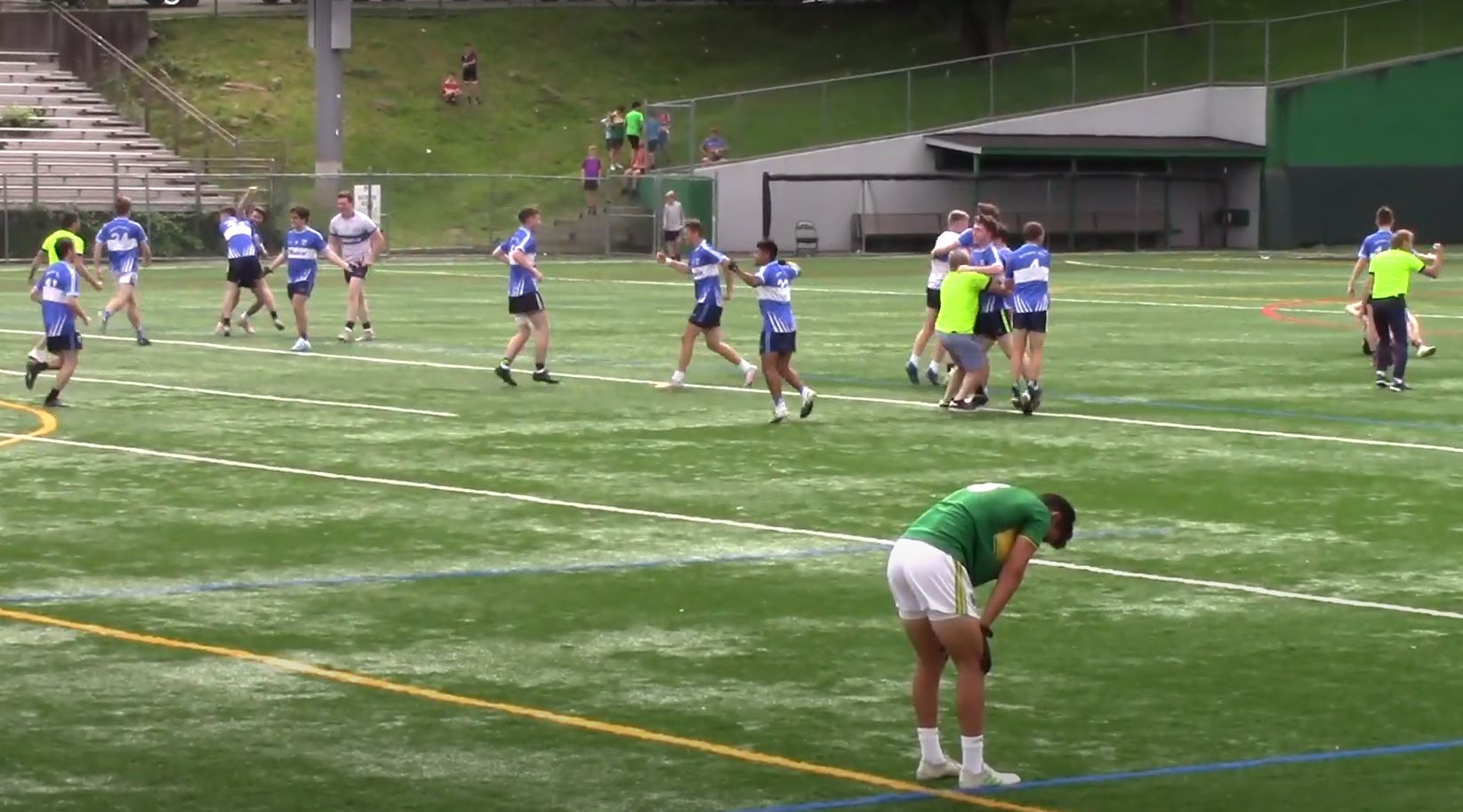