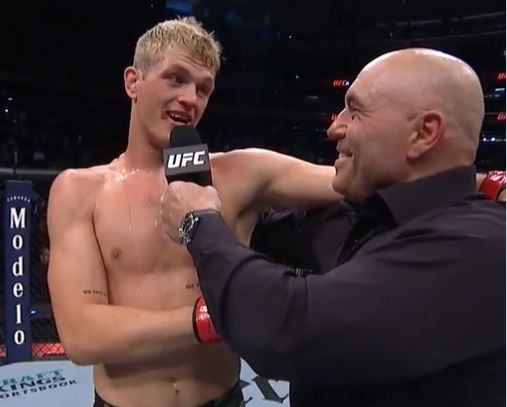 He came, he promised, and he delivered.

Irishman Ian Garry made good on a pledge that his debut in the UFC would be spectacular and finish in an early knockout.

With 10 seconds remaining in the first round at Madison Square Garden last night, the Dubliner countered opponent Jordan Williams with a straight right hand and followed up with a flurry of punches to end the contest in devastating fashion.

It hadn’t been all plain sailing for “The Future” at the sold-out venue for UFC 268.

The 23-year-old was on the back foot up until that point in the prelim contest as Williams landed some good punches which appeared to wobble Ireland’s latest MMA star.

Garry was sporting a bloody nose from the intense pressure but the American overextended as the clappers rang out – allowing Garry to pounce and end the contest.

The official end time coming at 4:59 in the first round.

“I just want to say, that was some hell of a knockout,” Garry said in his post-fight interview.

“I’m 23, making my UFC debut at MSG, it doesn’t get bigger than this, we just shocked the world, the Irish are back baby!”

Get ready for The Takeover part 2 🇮🇪

Garry, who credits Conor McGregor for inspiring his path into MMA, paid homage to his fellow Dubliner.

“A wise Irishman once said before me, he stepped in this very cage and he said, we’re not here to take part, we’re here to take over,” Garry said.

“This is the takeover, part two.”

“The step back, back paw and all ahahahaha just absolutely incredible!

You little fuckin daisy Ian! The step back, back paw an all ahahahaja just absolutely incredible!
Congrats @iangarryMMA ☘️ ❤️

A post shared by ‘The Future’ Ian Garry (@iangarry)

GoFundMe for Irishman Who Lost Legs in NYC Subway Accident Raises $200,000 in a Week