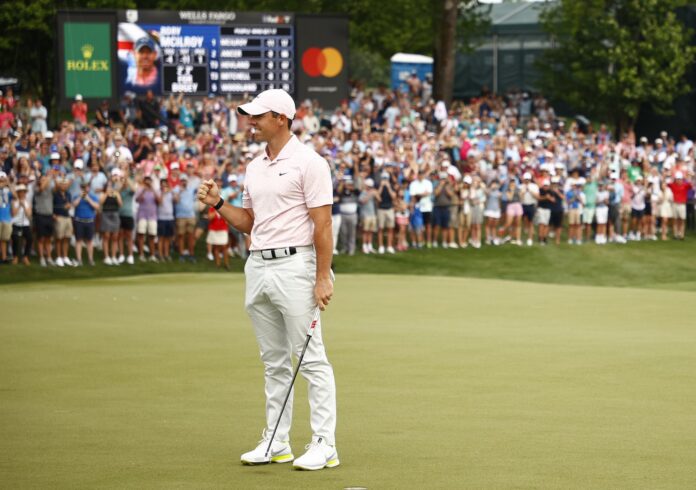 The County Down man seized control Sunday afternoon with back-to-back birdies from the bunker down the stretch.

The Holywood golfer survived a scare at the final hole, where his tee shot narrowly avoided a stream to the left of the fairway, to complete a closing 68 for a 10-under-par total and a one-stroke win.

“It’s tough to get over the line, especially if you haven’t done it in a while,” McIlroy said, a winner at Quail Hollow for the third time.

“It’s such a funny week, knowing my game was pretty good and then having my neck lock up on the range and sitting here Sunday night with the trophy. Just glad I got through it.”

The win lifts him back into the Top 10 of the world rankings just two weeks before the US PGA Championship.

The tournament is being held at 32-year-old’s happy hunting grounds Kiawah Island. The tournament was last held there in 2012 – when McIlroy romped to an eight-shot win there in 2012 and the four-time major winner has now been installed as firmly among the favorites

Meanwhile, Séamus Power finished four-over par after a 70, while Shane Lowry was two shots further back following a 71.