In what can only be described as a game of grit, determination and bravery, Leitrim – who were aiming for their first New York title – fell short to a seven-goal blitz by Rockland.

Judging by the scoreline alone, anyone who didn’t get to watch this brilliant game of football might take it as a walkover. Those who were there, know it was anything but.

In the first 15 minutes, both teams kept the crowd on the edge of their seats with Rockland ahead by 1-2 to 0-3 at the first water break.

Niamh Healy, the Rockland captain and one of the stars of the team, opened the scoring with a point and two minutes later she crashed through the Leitrim defense to find the back of the net.

Leitrim quickly responded with Lauren Rodican pointing from a narrow angle. Rodican, known as Maisy, had an outstanding game popping up all over the field time and time again.

Elaine McDonagh, who was exceptional in the first half, doubled the Leitrim tally before Megan Fitzpatrick also pointed.

Katie King then edged Leitrim ahead after hydration with a bullet of a strike that sailed into the top left corner of the Rockland goal.

However, calm and composed as always, Rockland responded with force.

A point by Kailey O’Conner – who appeared to be playing in a sweepers role – was followed by a flurry of goals by Rockland.

Goals from Claire Berkowitz, Maura Durcan and a brace from Sarah Donohoe – including one beauty of a strike – saw Rockland power ahead to what many would consider to a “no comeback zone” territory. 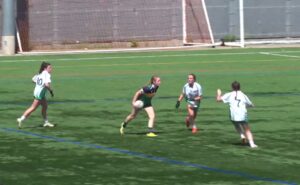 To their credit, Leitrim plowed on and worked a point from Roisin Plunkett with great defensive work by Richelle Cleary and Sarah Enright. Nonetheless, the halftime score read 5-4 to 1-5 and many Gaelic Park spectators had this game written off.

However, Leitrim didn’t show up without wanting to leave their stamp on the game and what materialized was one of the best second halves of the season.

Sheer grit and determination shone through, as Aoife Kearney, Ciara O’Neill and Megan Fitzpatrick brought their team together and started to ruffle Rockland’s feathers. Fitzpatrick got a point from the get-go and, with just under two minutes gone on the second half clock, Kathleen Enright found herself in front of Rockland goalie Ava Fitzsimmons and there was only ever going to be one outcome – three points in the bag for the Leitrim ladies.

From there on Rockland were put under immense pressure, playing with ten or eleven girls behind the ball, somewhat similar to the blanket defense we can often see in Croke Park.

With the final water break approaching and no score for Rockland since the first half, Leitrim were creeping back in.

However, a multitude of unlucky wides by Leitrim coupled with a brilliant display of goalkeeping by Fitzsimmons kept Rockland safe.

The last quarter saw the two teams within only six points of each other after two points by Fitzpatrick and Enright for Leitrim and one for Rockland by Donohoe.

Two points by Rockland player Healy was followed by two goals in as many minutes by Sarah Donoghue and Ryanne Kelleher – one beautifully assisted by Amelia Layden who put in Trojan work the entire game. Layden was undoubtedly one of the players of the match while Donoghue netted a spectacular hat-trick of goals on the day.

Even a point by Shauna McGrath and another by Fitzpatrick wasn’t enough to keep Leitrim in the game with Rockland taking home the silverware.

Rockland are a powerhouse of a team and the girls play with a level of confidence beyond their young years. With the average player age being 18, the future is bright for these Rockland stars.

Healy, Layden and O’Connor – were among the stand-out players for Rockland in what was an all-around top-class team performance. The management team of John Donoghue, Eoin Durcan and Brendan Collins were no doubt thrilled with the final whistle.

The win also cemented a season double for Rockland, who scooped the league title earlier this year.

At the same time, Leitrim should be equally as proud of their display as any other team would simply have given up. Outstanding for Leitrim on the day included Laura Wynne, who played a true captain’s role, and Deirdre Maguire, who both did brilliant work in defense.

The future is bright for these two teams.