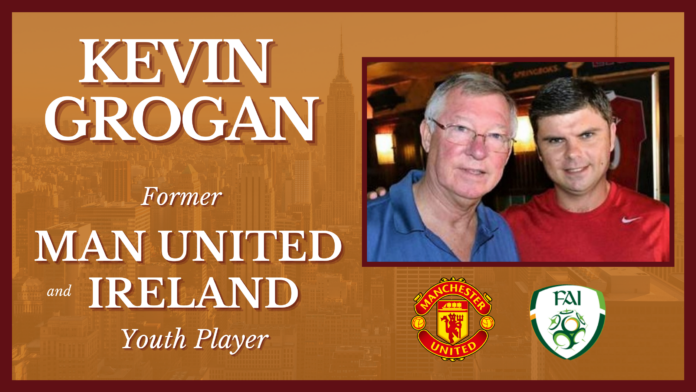 A very enjoyable and insightful show this week with former Manchester United and Republic of Ireland youth player – Kevin Grogan.

Kevin signed a full-time contract with Man United when he was 15 and was part of the Irish team that won the Under 16 European Championships in 1998.

The Dublin man was destined for a bright future with Man United but was plagued by a pelvic injury – which ultimately cut his career short and forced him to leave the club a few years later. Kevin underwent a number of surgeries and attempted comebacks with UCD, Milwall and St Patrick’s Athletic before calling time on his short career.

He talks to us about his time at United, his injury setbacks and the mental struggles of dealing with those disappointments. Kevin moved to America when he was 27 and carved out a very successful career for himself in coaching and in the business side of the game in New York where he now runs his own private consultancy company called Kevin Grogan Soccer – www.kevingrogansoccer.com.

The company work in sports technology and business development for a number of sports organizations and elite clinics in Japan.

The company are business consultants for Rezzil – a new virtual technology tool that helps players develop their game.

Kevin’s Instagram handle is @kevingrogansoccer and he also hosts his own soccer podcast called the Hairdryer treatment which is available on all major podcast platforms.

There are loads of great stories in this episode and some good laughs – we even delve into some hair product placement with Johnny and Kevin reveals he almost made a comeback as a kicker in the NFL!

Kevin also talks about – Moving to New York City at 27 – His soccer academy – His private consultancy company – The state of soccer in the U.S. – The Super League – Managing NY Shamrocks and Landsdowne Yonkers.