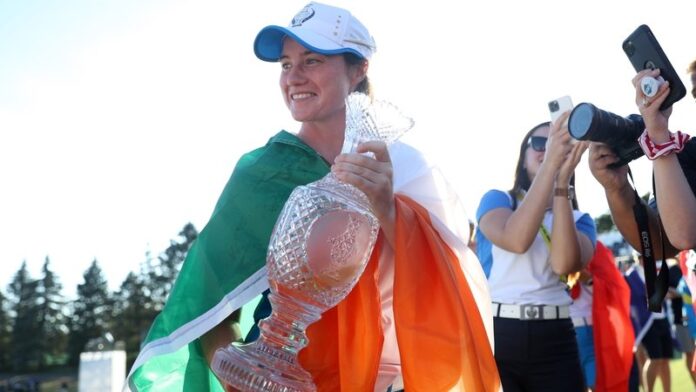 Maguire beat Jennifer Kupcho in singles at the Inverness Club in Toledo, Ohio, to give her a staggering four-and-a-half points from five matches which was a record for a rookie on either side.

The crowd even started chanting “MVP” when she took hold of the Waterford Crystal-made trophy.

When Leona Maguire got to hold the cup, chants of of MVP rang out pic.twitter.com/hIjEujIQjd

The 26-year-old more than justified her wild card pick by European team captain Catriona Matthew becoming the first Irish player to ever compete in the tournament. The Solheim Cup is the women’s equivalent of the Ryder Cup where Europe and the United States battle it out every two years.

Europe needed 14 points to retain the trophy as defending champions and wins for Madelene Sagstrom and Celine Boutier edged Europe closer to the target. Anna Nordqvist and Nanna Koerstz Madsen chipped in with half points, before victories for world number one Nelly Korda, Brittany Altomare and Megan Khang kept Europe in the hunt.

It then fell to Finnish rookie Matilda Castren to make a nerveless up and down from a bunker on the 18th to beat Lizette Salas and make sure the trophy would return across the Atlantic. Emily Pedersen then guaranteed half a point from the bottom match to ensure outright victory.

What a week for this absolute superstar @TheSolheimCup. Now the whole world knows how incredible you really are and I couldn’t be prouder @leonamaguire #unbeaten #truepassion 💪🏻🇪🇺 pic.twitter.com/5kwTY67oW3

Maguire said that she had only one aim on the final day of play having already delivered 3 1/2 points over the first two days in fourball and foursome matches.

“The goal was to get my point, that’s all I can do. I’ve given it my absolute all this week, I couldn’t have given anything more. I couldn’t have asked for a better week.

“Jen is a world-class player. We’ve done battle many times in college. This wasn’t the first, and it will definitely not be the last. I knew I was going to have to play some really good golf to beat her today.

“Got off to a great start; that eagle on two really sort of set me up and I holed some really nice putts, and just really kept my foot down all day.”

Team Europe captain Catriona Matthew added: “It was an amazing team effort after we got off to a great start this morning.

“We knew it would be so tough with no European fans. I’m just so proud and happy for them.”

Maguire has been in blistering form all season notching nine top-15 finishes. She was just nudged out of first place at the Meijer LPGA Classic in Michigan in June.