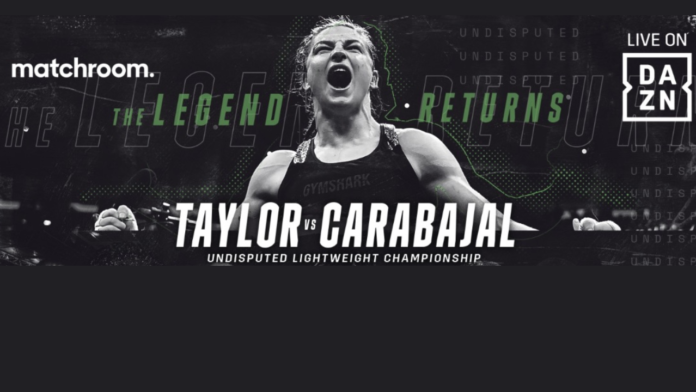 After edging the biggest fight in women’s boxing in New York earlier this year, Ireland’s Katie Taylor will travel to London next month for her next fight.

The undefeated Bray woman (21-0, 6 KO) will put her world lightweight titles on the line against Argentinan Karen Elizabeth Carabajal on Oct. 19 at the OVO Wembley Arena.

The fight comes after a potential “homecoming” rematch against Amanda Serrano at Croke Park fell through — details of which will be flushed out on The Long Hall Podcast next week when The42.ie’s boxing reporter Gavan Casey returns to the show.

It will be the second fight this year for 35-year-old Taylor after she fought three times in 2021.

“It’s hard to believe it’s been almost six years since I made by pro debut there [London] so it’s great to go back now and headline,” said Taylor.

“It’s been an amazing journey so far but there are still lots of great fights out there for me and I’m excited about what’s still to come.”

32-year-old Carabajal (19-0, 2 KO) will be getting her first shot at a world championship title and will be fighting for the first time as a professional outside her home country.

Like Taylor, Carabajal’s last fight was also in April where she claimed a unanimous decision win over Lorena Edith Agoutborde. She has stopped two of her last three opponents.

However, Taylor will be, by far, the most difficult opponent Carabajal has ever faced, and in reality faces an insurmountable challenge. Taylor has been installed as the 1/33 favorite with bookmakers Paddy Power.

“I was very happy when I received the offer to challenge Katie,” said Carabajal.

“The hard work has paid off. I’m not thinking for a second about giving Katie a win. All the belts will come back to Argentina with me!”

The fight will be live worldwide on DAZN (excluding Australia and New Zealand).