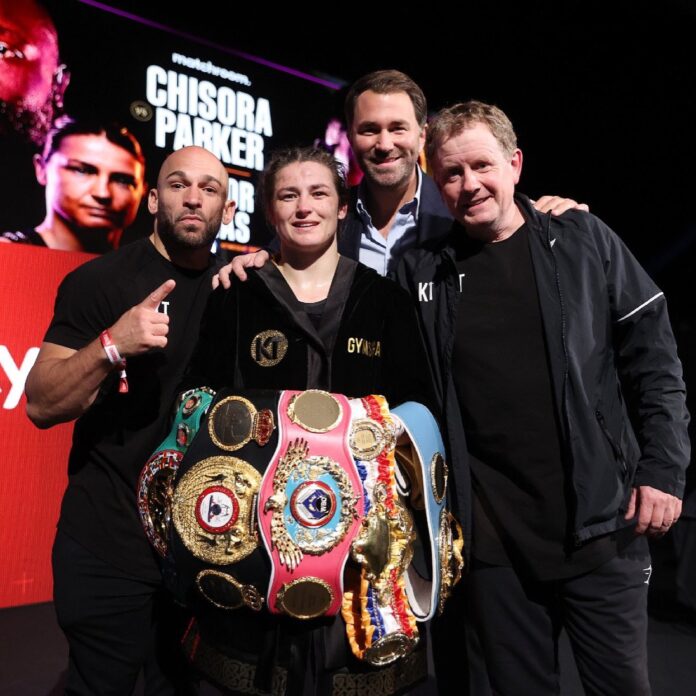 The Bray woman, who is based in Connecticut, went the distance with her former Olympic foe to secure a unanimous points decision of 96-94, 96-95, 96-95.

The fight was yet another brilliant advertisement for women’s professional boxing and Taylor had to pull out her very best in the closing rounds. The 34-year-old outpunching and out working her British counterpart up until the closing bell.

“I had to dig deep near the end and leave it all in there tonight. I think I showed the heart of a champion tonight.”

Taylor started strong in the early rounds with her trademark rapid shots but her energy waned and opened the door for Jonas to land some heavy, powerful blows in the middle rounds.

The sixth round was a ding dong affair where speed versus power played out. Taylor unloading several flurries while Jonas nailed a hard left hand which jolted the Bray woman where she looked momentarily in trouble.

But Taylor dusted herself down and let rip with an onslaught of combos in the final rounds which ultimately swung the contest back in her favor.

In fairness, the Jonas camp did not dispute the judges scorecards even though they were painstakingly close.

The pair embraced at the bell and a rematch could be on the cards.

For now, Taylor extends her unbeaten professional streak to 18-0 and remains the biggest draw in the female boxing ranks.