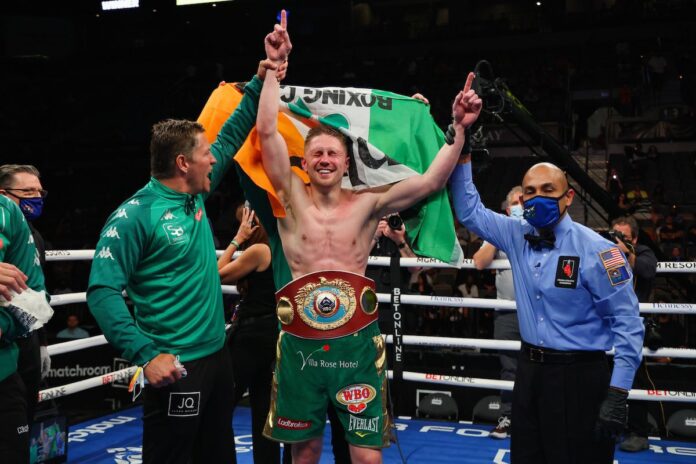 Donegal’s Jason Quigley edged out Shane Mosley Jr in a pulsating middleweight clash in Las Vegas Saturday that puts him on a trajectory towards a world title fight.

Quigley went the distance with the American inside the Michelob ULTRA Arena at Mandalay Bay and dropped to his knees when he was announced the winner.

“That fight meant so much to me. I’ve been through so much shit to get here,” an ecstatic Quigley said afterward.

In truth, the bout could have gone either way with many rounds nearly too close to call but Quigley’s technical skillset and endurance appeared to swing the clash in his favor – despite not having fought in 16 months.

“I thought it could have been a draw and I felt I did do enough to win the fight,” the softly spoken 30-year-old said.

“I felt that I was the fresher fighter. I saw Shane starting to press a little bit, I knew he was feeling ‘is this was slipping away?’ And I could sense that and I think the judges sensed it.”

“I got in there and took care of business.”

It was a tit-for-tat clash throughout and Mosley appeared in more control early doors landing some accurate punches and dictating the pace.

Quigley began finding his range with the left hook from the third and as Mosley became more aggressive the Ulsterman caught his Californian nemesis with some solid counters.

Mosley landed a smart right-left combo in the fourth that hurt Quigley and the American upped the ante in the fifth. But Quigley responded and landed a nice body shot before the bell.

The bout began to open up from the sixth and Quigley appeared more confident – bouncing on his toes and picking off some clinical shots.

Quigley had Mosley on the backfoot by the seventh, knocking him into the corner with a big right but Mosley responded with a powerful overhand right of his own. Emboldened, Mosley pressed Quigley into the ropes and landed a heavy body shot but the Irishman landed a sweeping right hand that caught Mosley on the chin.

Both fighters were opening up now and letting loose as the fight heated up.

In the eighth Quigley landed a lovely left-handed jab from close range followed by a smart right hook.

The pair traded huge power shots in the ninth as the crowd grew louder.

Into the final round, Quigley landed a big right and pressed Mosley onto the ropes. Back to the center of the ring and – with both men tiring and leaning against each other – Quigley chizzled away with a number of body shots.

Mosley responded with a combo of his own that stiffened Quigley’s legs and followed it with a left hook. Down the stretch and both fighters let rip in a memorable affair but Quigley hung on to claim the win and the WBO-NABO ranking title.

The stats showed the Donegal man as the more accurate puncher, landing 32 percent of his punches compared to 25 percent for Mosley. The latter did land two more power punches (96-94).

Quigley takes his record to (19-1, 14 KOs) and has now won three fights on the bounce since his shock defeat in 2019 to Tureano Johnson, who stopped the Donegal man in the ninth round.

He has now set his sights on a WBO middleweight world title clash against reigning champion Demetrius  “Boo Boo” Andrade.

“Boo Boo Andrade, now that you’re the champ, you’re always crying that you don’t have people to fight you,” Quigley said.

“I’m not saying that I’m going to kick your ass. I’ll get in there and put on one hell of a fight with you. I’ve got a belt, you’ve got the main one, give me a crack at that title.”