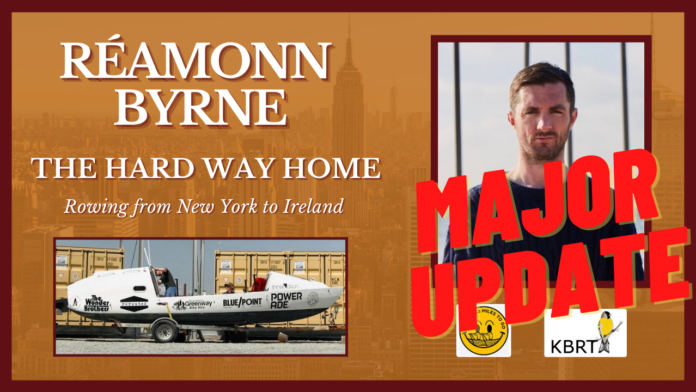 On this week’s podcast, Michael gets an update from Réamonn Byrne about his attempt to row from New York to Ireland as part of the three-man team known as The Hard Way Home.

Réamonn, who is from Waterford, along with Americans Chris McCaffrey and Ryen Cosgro are embarking on a 3000-mile voyage to raise funds for the Kevin Bell Repatriation Fund Trust.

The team set sail on June 15 but suffered a major setback shortly into the voyage and had to be pulled ashore to Cape Cod after losing power.

Reamonn gives Michael a rundown on what exactly happened and what the team’s plans are going forward.

To keep up to date with the latest developments of the team follow them on @thehardwayhome.

We are currently expanding our website – www.thelonghallpodcast.com and are now covering more Irish American news and sports stories including golf, soccer and New York Ladies football so if you would like to suggest a story or submit one yourself please message us on social media.

We are also releasing a Conor McGregor podcast special with Irish combats sports reporter Donagh Corby ahead of the big fight this weekend so stay tuned for that!

We talk about McGregor’s impact on America and if this is a must-win fight for his legacy in UFC.