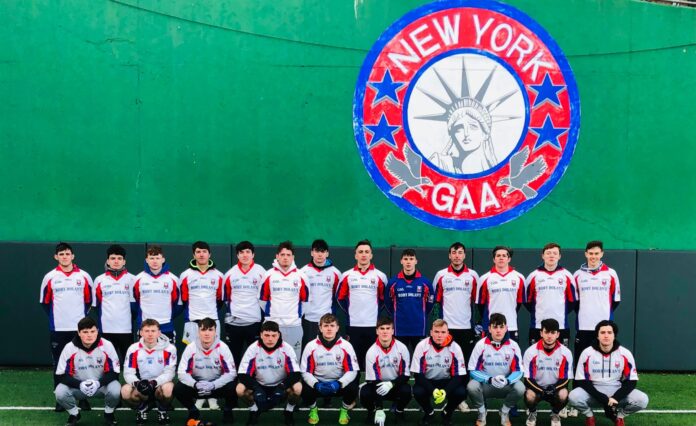 Players on the New York Colleges football squad are looking to etch their names in history this weekend by clinching the Corn na Mac Léinn Cup for the first time.

The 26 man squad, who are all American born, will play Tallaght in the semi final of the Higher Education Championships’ third tier competition at Carlow IT Friday (throw-in is at 8 a.m. EST).

It will be the New York Colleges fourth time participating in the competition since their first soiree into the tournament back in 2018. The New York Colleges lost out to Liverpool John Moores University in the 2020 decider and are hoping to go one better this year.

A win Friday could see them lock horns with reigning champions Liverpool John Moores again, should the British side overcome Southern Regional College in the corresponding semi-final. The competition was not held last year due to COVID restrictions.

The New York Colleges team have left no stone unturned with their preparations this year — the appointment of Meath football legend Graham Geraghty to the fold as head coach signaled their level of intent to bring silverware back across the Atlantic.

“A lot of preparation has gone in so we’re not here to make up the numbers.”

Geraghty has been heavily involved in the panel’s preparations this season and has been in the Big Apple on two separate occasions.

“They’ve worked really hard over the last couple of months and… I’ve been really impressed with the standard that’s there,” Geraghty said in a recent episode of The Long Hall Podcast.

Geraghty, who won All-Ireland honours in 1996 and 1999, is bringing valuable experience to the New York setup given that he won the Corn na Mac Leinn Cup in 2011 as manager of Blanchardstown IT before leading them onto Trench Cup success the following year.

“It’s a massive competition. It’s a huge opportunity for young lads to get home … and I wouldn’t have gotten involved if I didn’t think they’d have a right good chance of lifting the silverware,” said Geraghty.

The New York Colleges team are made up of players attending various universities in the U.S. Many of the players won the Féile Peile na nÓg Division 1 title in Cavan in 2017 under Curtis and represent clubs including Shannon Gaels, NY Rangers, St. Barnabas, St. Raymonds, Rockland, St. Brendans and NY Celtics.

Curtis said that Féile team defied the odds in 2017 and the current Colleges team will hope to use that win as a springboard to success this week.

“Before the Féile in 2017 people were saying we shouldn’t really be in Division 1, but we went right through the whole division undefeated,” Curtis said.

“That was a marker, hopefully we can build on that.”

The team has played challenge games against the New York Junior team over the last fortnight and faced off against Wexford U20s in another challenge game Wednesday. The management team helped raise over $40,000 to finance the trip.

With all the hard work now put in, it’s now left up to this young side to shoot for the stars.

Check out our podcast with Paddy and Graham where the pair discuss the preparations in more detail.